Focus needs to be on the child, not on would-be adopters

Focus needs to be on the child, not on would-be adopters

The easing of restrictions on the adoption of children by parents who do not share the child’s ethnic background is an opportunity to tackle the shamefully high numbers of children in the care system. However, it is vital that these changes do not then lead to an increase in the fast track adoption of babies.
Education Secretary Michael Gove and Children’s Minister Tim Loughton recently announced new guidance for social workers informing them that the race and ethnic background of would -be adopters should no longer be given significant consideration when making a decision.
Last November, Loughton said there was “no reason at all” why white couples should not adopt from different racial backgrounds. “If it is a great couple offering a good, loving, stable permanent home, that should be the number one consideration,” he said.
“Too many social workers are holding out for the perfect match, so suitable couples are turned away and children are staying in care for years as a result.”

The desire to place more children with loving families and thus remove them from the care system is a laudable one. Surely it is preferable for a child to be placed in a loving home where they can be well cared for, rather than remain in the care system purely because there is no adoptive family that matches the child’s racial or ethnic background?

The new guidance is particularly aimed at white families seeking to adopt black and minority ethnic children who represent the majority of children in care.

However this approach potentially presents the problem of BME children, especially babies, being fast tracked into adoption. It also fails to consider the impact that such transracial adoption can have on vulnerable children and doesn’t address many concerns at the heart of the system.

Many of the clients we see at VCF are families facing the prospect of their children being taken into care and potentially placed into adoptive homes. Indeed, this issue of removing children from families as a child protection concern, rather than working with families to keep children with their natural parents, has been well explored in social care circles. That re-focusing of social workers’ attention on families is just one of the topics we expect to see discussed in Professor Eileen Munro’s upcoming final report on child protection.

However with the removal of restrictions on matching the ethnic background of children and would be parents, we potentially face a scenario where black and minority ethnic babies may be fast tracked for adoption if the authorities believe that the child can be quickly placed into a white family.

The idea that white parents should be able to be quickly matched with BME children unfortunately presents BME children as a last resort choice- ‘I can’t have a white baby as there aren’t enough available, but I’ll take a black one so that I can start a family’.

In other words, the removal of the restrictions appears to be less concerned with helping the children in care find suitable parents, but instead more about getting white would be parents to be able to get a baby, even one from a BME background, rather than be denied the opportunity to become a parent.

With many would be parents also more keen to adopt ‘precious’ babies rather than troublesome teens, we could see a situation where babies from BME backgrounds, are fast tracked into adoption by white parents, leaving BME teens and young adults to languish in the care system.

Internationally, we see such fast tracking pretty much every time there is a natural disaster in a developing country- most recently in Haiti following the devastating earthquake. There, the EU Commission was forced to step in to address the fast tracking of children out of Haiti to Europeans (1) or the Americas.

There are also well documented concerns about the impact of transracial adoption on a child’s identity where: “Too many transracially adopted adults report feeling alienated, displaced and disconnected from their community of origin, unable to speak the language of birth relatives when they do trace them, of internalising the negative racist messages in society, of struggling to understand who they are. The narratives of transracially adopted adults demonstrate unequivocally that love, alone, is simply not enough”. (2)

The sheer number of children from black and minority ethnic backgrounds in the care system and the absence of enough BME would- be adopters, does present a major problem. However, this does not in itself justify the framing of the question in favour of the would -be parent rather than the child.

It is clear that there are fundamental questions that need to be addressed about how children end up in care and the types of families that come forward to adopt them: Why are BME children overrepresented in the care system? Is it that they are more likely to be removed from their families and placed into care? Is not enough being done to keep them within their families? Why aren’t more BME would-be parents coming forward to adopt BME children? Are we creating a system that is prepared to act more in favour of white would be parents instead of black babies?

And finally, would the government move the same way if there was a demand for white babies from BME would-be parents?

The government’s requirement for social workers to pay less attention to matching a child’s and would –be parents’ ethnic background, fails to address the root problem of the over representation of BME children in our care system.

By focusing on making the system easier for white would be parents, the government has highlighted just how little it prioritises the needs of BME children in care.

@defenddigitalme: In a workshop with young people @TheWarrenYP we discussed the metaphors used about data. Three key concerns emerged on use of data about their lives: Misrepresentation, Power hierarchies, and Agency over what data used ‘in your best interests’ means. #DataWordsWeUse #DPDIBill https://t.co/TNJwtjIq1u 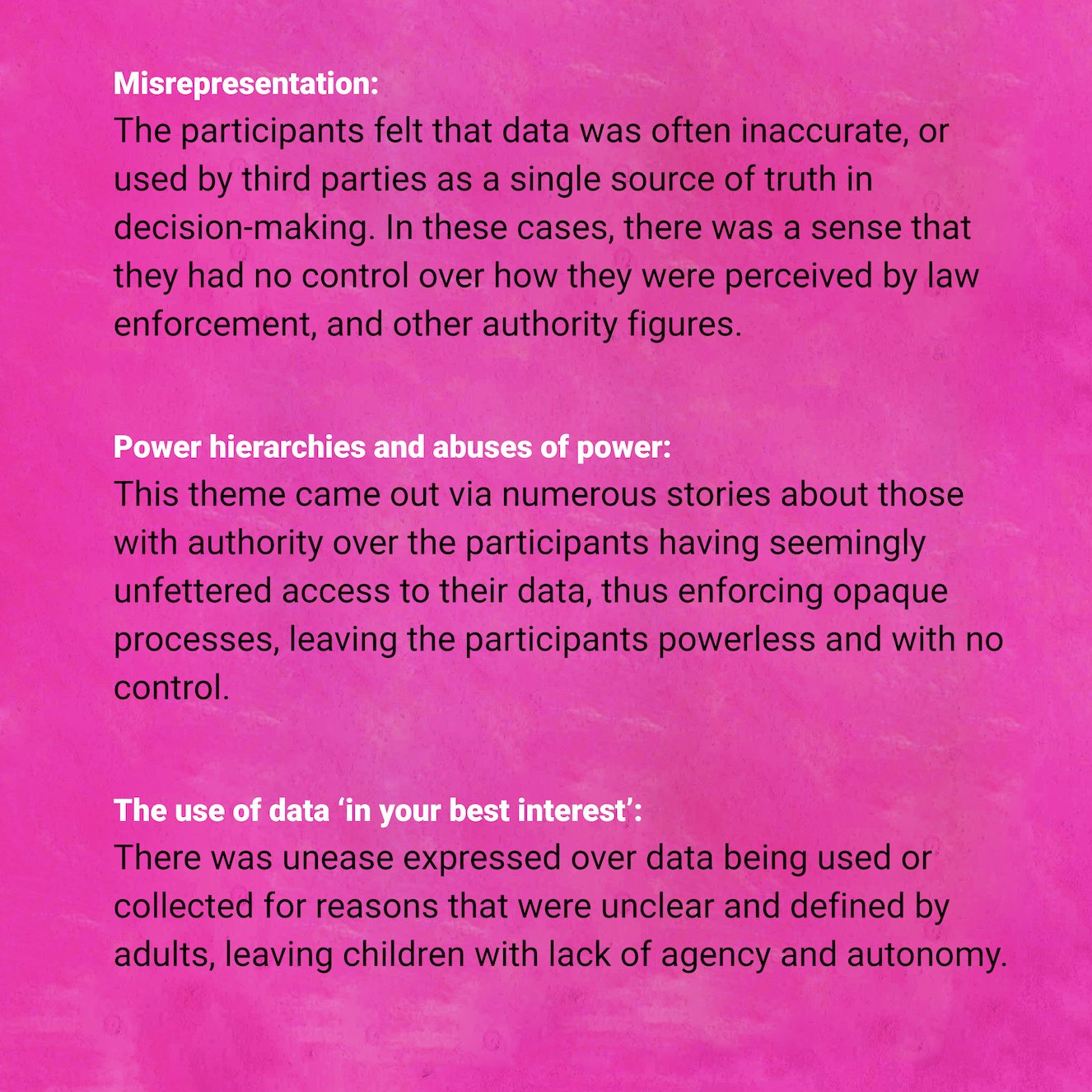 @TheABB: “But why would anyone want children’s identity data? They haven’t even got credit cards.” An answer to this among other reasons ⬇️ when asked why children’s personal data and privacy, matter. But our @educationgovuk gives it away. For free. In bulk. #OnlineSafetyBill hypocrisy https://t.co/1RjFMnalCi
@ukvcf